I usually try to begin with a witty title to grab a few reader’s attention, but I don’t think that’s appropriate in light of the subject I’m writing about today.

Flares are often used by supporters to celebrate after goals and intimidate opponents, on some occasions they have been used as weapons by one group of fans against the other. Two stories of flares cropped up in the last day: one tragic, the other, well, just intimidating.

The tragedy: Kevin Beltran Espada was a San Jose (Bolivia) fan attending the Copa Libertadores (South American Champions League) match against Corinthians (Brazil). He was a 14 year-old killed instantly when struck with a flare thrown from the Corinthians section. The flare was launched following a Corinthians goal and hit Beltran in the head. 12 Corinthians supporters were arrested for the incident and are being held in Bolivia pending the investigation. Many of the San Jose fans left in tears on hearing of the incident, and Coach Tite of Corinthians held a brief press conference where he expressed regret on behalf of all the Corinthians players and then left stating that, “I didn’t want to be here (at the conference), what happened is too heavy to be able to talk of football, I’m sorry.”

Conmebol (the South American Football Federation) has started its own investigation into the incident and has declared that Corinthians must play the next 60 days (of Copa Libertadores) matches behind closed doors. 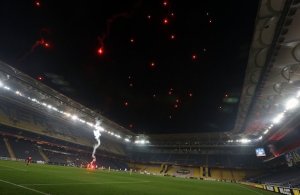 Fenerbahce fans let the teams know they are still there

Despite the tragedy I don’t hold out much hope that flares will be dropped from fan repertoires. Half a world away, in the Europa League competition (UEFA’s second level tournament behind Champions League), Fenerbahce (Turkey) played behind closed doors in their round of 32 match against BATE Borisov (Belarus) due to the throwing of fireworks on the pitch during their previous European match against Borussia Monchengladbach.

Fenerbahce set up a big-screen TV outside the stadium for the fans that decided to come anyway and watch together from the parking lot. They will likely need to do so for their next match as well following the fans celebration of their lone goal in the match (allowing them to advance 1-0 on aggregate). In addition to the flares lit in the parking lot, a number of flares were launched by fans into the stadium and onto the pitch. It made for an eerie sight and underlined the banner held by the fans outside declaring “As if we were here”.

I appreciate the importance of sound and visuals made by the fans – heck that’s what I’m researching, but the degree to which flares take the intimidation is beyond most people’s sensibility for games. The risks are too great. Beyond just the danger inherent in using explosive devices in large crowds (which just seems like common sense), they have far too often become weapons in the hands of more aggressive supporters and hooligans. Inter Milan fans were banned for a series of matches several years ago for hitting the AC Milan keeper Dida with a flare in one of their derbies. And earlier this year Zenit St. Petersburg fans burned a section of their seating at a Anzhi Makhachkala  for a little fun. Considering the long history of stadium disasters and the long tradition of using pyrotechnics, its surprising this hasn’t happened more often – or maybe it does and I’m only just paying attention now.

Three months after Canada’s horrific exit from the World Cup Qualification in Honduras, it was Team USA’s turn to visit San Pedro Sula and enjoy the hospitality of Honduras. Despite a opening goal by Clint Dempsey, the Hondurans came back to win 2-1 in the opening of the final round of World Cup Qualification.

What does home field mean? Well, set the kickoff time for mid afternoon when those USA players used to either Europe (or a winter off from MLS) will have to play through the heat and humidity of San Pedro Sula; fill the Stadio Olympico with thousands of hostile fans that can boost the Hondurans and wear down even the toughest Americans and you get a chance for FIFA’s 59th ranked team to knock off the 28th ranked team in the first round of CONCACAF’s hex round of 2014 WCQ.

While the USA has been a fixture at the last few World Cups, their position seems a bit more tenuous this time as several of the other CONCACAF nations seem to have made up some ground on the Americans. Despite Jurgen Klinsmann securing a rather rare victory for the Americans in Mexico City last year, his tenure as coach has been a little underwhelming. The team lost to Jamaica for the first time in the previous round of qualification and were very nearly knocked out in a tight finish between USA, Jamaica and Guatemala in their Pool. Add to that, they have struggled in their last two matches against Canada (both 0-0 draws), and you have a Team USA that does not seem up to repeating the progress of the past few World Cup editions of the team.

Honduras does not have the star power that USA has available, but as Canada discovered (and both countries already knew) the environment and fans of Central American countries provides a much tougher opponent than they are used to. Perhaps this is the weakness of Klinsmann as the USA coach; he’s not as fully versed in the environment that is CONCACAF. Yes, Klinsmann has coached a team all the way to the World Cup final, he has even hoisted the trophy himself as a player, but he has not dealt with the hot and cold environment of North American soccer. Hot in that the passion in Latin America rivals anything in Europe, and cold in that USA can barely manage home field advantage in the USA (the last Gold Cup final in Kansas City was a pro-Mexico crowd). As long as there is relative apathy in Canada and the US, it will always be difficult for those teams to develop the same level of home crowd intimidation that the Latin American countries can provide. That will leave open the possibility of dropped points at home (Canada wouldn’t have needed to worry about getting any result in Honduras had they won at home), that means the those difficult road games take on even more importance.

The USA still has four more road games in the hex, five if you count their home game against Mexico. While they only have to finish 3rd to qualify and even 4th gives them a qualifier vs Oceania, look at your map and you will find that the road to Rio runs right through Central America.

In looking over the news from the FA Cup, I came across an example of what I hope to find in my field research.

An article from the Telegraph has a story about a fight that broke out among Arsenal supporters at the Brighton and Hove Albion v. Arsenal FA Cup tie. The fight broke out when the match was tied 2-2 and one group of Arsenal fans unfurled a banner saying, “Arsene, thanks for the memories, but it’s time to say goodbye.” Another group told them to put it away, and a fight broke out within the Arsenal supporters section.

This is exactly what I want to find out about. What sort of self-policing do the supporters groups have? What sort of conflicts happen between members of different fan groups? How do they negotiate space in away sections, which probably have a more random ticketing situation than the season ticket holder sections at Emirates (in Arsenal’s case)?

Clearly in this case, the group with the banner wasn’t appreciated, and dealt with by the other supporters present. By the end of the match the Arsenal section (Arsenal won 3-2) was chanting, “One Arsene Wenger.” So not only was there a violent reaction against the banner, but then the supporters then felt the need to declare their support for the manager following the incident (and once the game was safely theirs again).

It’s stories like this that let me know I’m on the right track.