Since my last post, things in the Ukraine have shifted dramatically. Maidan is over (sort of), Yanukovich has fled, and now the country is threatened with invasion by Russia – the Crimea already has been invaded.

Geopolitics aside, this is a soccer blog, so the quick news is that in the previous round Dynamo Kyiv had their home match moved to Cyprus due to the protests in Kyiv, but all the other Ukrainian teams managed to play their home dates. Kyiv, Donetsk, Dnipropetrovsk, and Odesa were all knocked out of the Europa league leaving no teams left to play in Europe. With the threat of war, the Ukrainian Premier League has decided to suspend play indefinitely and has cancelled its friendly against the US – which had already been relocated to Cyprus.

But soccer does go on. One of the suspended matches was Dynamo Kyiv vs. Shakter Donetsk, with the Ultras already having purchased tickets, they decided the show must sort of go on. They managed to convince the Olympic Stadium to open for a Ultras vs Ultras match in a show of Ukranian solidarity. Remember that Donetsk is in the ethnically Russian part of Ukraine that Putin is so worried about. Check out the link above for photos of the match. (From Ultras-tifo.net)

Update – Mar. 5. So despite rumors that the Ukr – USA friendly was cancelled, it’s game on in Cyprus. 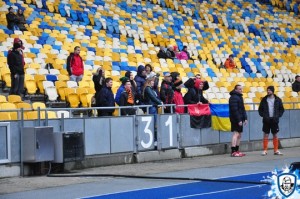 Shaktar fans at the ultras friendly.