The discussion just reinforces to me the performative aspect of Di Canio’s fascism. Here was a player who acted out fascist salutes during his time at Lazio (again, a team with a historical connection to Italian fascists), got tattoos to back his fascist credentials; yet on moving to England to play there is nothing from teammates or his managers to evidence any fascist sympathies. Despite all his antics at Swindon, the fascist performance seems to be absent. Instead, his performance in England has been received as a hotheaded Italian caricature. Either he is a gifted actor who knows his audience, he left his fascist ideas back in Italy, or he realized that his fascism isn’t going to play in England so he’s kept his politics to himself.

And in yet another update to the whole situation, Di Canio now steps into the Tyneside derby this weekend as his team takes on their local rivals Newcastle United. The English FA and local police have already geared up for the traditionally tense match with a warning to the Newcastle fans that fascist salutes will not be tolerated. Yes, far from having to warn the Sunderland fans from taking on the assumed political beliefs of their manager, authorities have taken to warning rivals not to use that as a way of mocking Sunderland’s manager.

So if Di Canio has brought fascist symbols to English sport, then so far the only evidence of it is through the use of them as mockery.

English football is on its head over the appointment of Paolo Di Canio as the manager of Sunderland AFC, but as this was announced on Sunday following the Man U game, it could not be a April Fool’s Day gag. Although I am studying English football I had never really seen such a clear example of how the different leagues relate to one another until he was hired to replace Martin O’Neill and keep Sunderland from falling into the relegation zone. The hype/hypocrisy from the press over his hiring has again got me thinking about the treatment of non-Brits in the Premier League, particularly in management positions.

Di Canio isn’t just a lightning rod for controversy, he is the lightning. This is the player who, while playing for SS Lazio in 2005, gave a Nazi salute to the AS Roma crowd following a goal and again to Livorno fans, giving him a ban and considerable notoriety (Giorgos Katidis take note: you may never get a chance to play for the Greek team, but you still have a future career in management). Of course, he only fuelled the controversy with his response to the incidents saying, “I’m not a racist, I’m a fascist.” Despite this history, he managed to get hired at Swindon Town, then in League 2, and guided them to promotion, and was on track to see them promoted to Championship before he quit due to conflicts with the club board and ownership. One of the Swindon board members described Di Canio’s spell at Swindon as “management by hand grenade.” Perhaps because you could never tell what was going to happen next with him. Some of the highlights of Di Canio’s management techniques involved: kicking one of his players, mowing the field turf, and offering to spend his own money to keep three players on loan at cash-strapped Swindon Town. He even broke into Swindon’s offices following his resignation to take the team pictures that he wanted. This is a man who will not be stopped. But is he a fascist? Does it matter?

Arguably to the media, David Milliband, Football Against Racism in Europe (FARE), and many Sunderland fans it does. He does occupy a very visible spot in the sporting world now and although kids don’t often idolize the managers, he is very much a more public figure than he ever was at Swindon. However, he isn’t being paid for his politics, and having politically correct views is not a job requirement – winning games is. That said, I think some of the outcry over the whole situation is that it is another foreign manager at an English club. Consider the reception various other non-Brit managers have received this year: calls for Wenger’s dismissal, Benitez out was the cry at Stamford Bridge before he’d finished his first game, Villas-Boas nervy start at Tottenham. Arguably the worst job this year is Harry Redknapp’s QPR, but he’s English and trying to save a team so he’s been cut some slack. See the hypocrisy, it’s tougher to be a manager if you aren’t British because the game is British. It would be like all the Canadian NHL teams being coached by Europeans – Don Cherry would have an aneurysm.

But is he even a fascist? On the whole he probably leans that way, he has a tattoo “DUX” on his arm. However before I found that bit out I was wondering about his performance to the Italian fans those many years ago. Could it be that he was playing the part that was expected of him? Was he just riling up the opposing fans (Mussolini was apparently a Lazio fan) by playing the part of a fascist on a team long associated with fascism? Is it any different than Paul Gascoigne piping in front of the Celtic fans when he was on Rangers? Or Artur Boruc crossing himself as the Celtic keeper in front of the Rangers fans? Players can get just as involved in the performances as the fans. Am I going to turn off Sunderland because of Di Canio – not likely, especially if Crystal Palace get promoted and Ian Holloway is back in the EPL. Di Canio and Holloway  – that would be a press conference to watch.

Until then at least we know that the Sunderland practices will run on time. 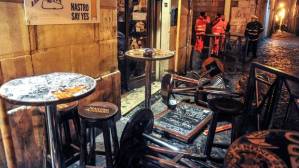 Europe’s other cup – the Europa League, continued its group stages today, but not without some off-field problems.

Tottenham Hotspur was in Rome to play Lazio, which should have been a chance for two teams to celebrate a fan favorite that happened to play for both, Paul Gascoigne. Instead, all the news focused on the bar “The Drunken Ship” where visiting Tottenham fans were attacked by a masked mob of about 40 men armed with paving stones, metal bars, and anything else they could get their hands on. The mob attacked from multiple directions, trapped the Spurs fans, some American tourists, and others in the bar and proceeded to beat and attack the fans until they were through.

The immediate reports after the attack focused on the idea that it was a group of Lazio supporters that attacked the Spurs fans. On the surface this is of course the most simple explanation: the two teams were scheduled to play, Lazio has known fascist elements in its ultra groups and Tottenham fans relish their Jewish connections as the “Yid Army” and roots in a Jewish section of London.

While the last part is likely part of the reason for the attack, there is a problem with conflating all violence against football fans as football fan violence. It later came out that one of the suspects arrested in the attack was not a Lazio supporter, but an AS Roma supporter instead, which makes the Lazio vs Spurs story a less satisfying explanation.

In a meeting with my supervisor the other day we discussed the idea of whether a fan could be a member of multiple groups. My response was that to support two local rivals risks being seen as a traitor to either of the groups. Fan loyalties, if they are divided, reach outside the main rivalries and perhaps divisions so as to preserve the ‘other’ that your core loyalty defines itself against. My loyalties are divided between Arsenal (top choice) and Barcelona: Arsenal has the strongest pull on me, but Barcelona is a comforting fallback when Arsenal continually sells off its best players and then fails to win a trophy (again). As I’ve stated earlier, my biggest problem in Canada is TFC and Vancouver, as I am caught in an awkward position of liking both teams for my attachments to those cities.

Going back to Rome now, the arrest of an AS Roma fan undermines the idea of it being a straight case of fans vs fans. Just a couple of weeks ago the Roma-Lazio derby was its typically violent affair both in the crowd and on the field. These two groups of fans are not going to sit down and sing kumbaya together just so they can beat up some Brits. Instead, my theory is that there is a smaller group that happens to be united, but keeps connections in both ultra groups that is instead responsible. Rather than looking at this as football violence, this should instead be considered a hate attack. Fascist groups often recruit from ultra groups, but after reading Gabriel Kuhn’s Soccer vs the State, I will make a distinction between ultras and hooligans. Ultras fight for their team, whereas hooligans just fight. It is a difference of having a unified purpose (ultras) and nihilism and anarchy (hooligans). Now this attack becomes one directed by a fascist group containing football fans, rather than by football fans who are fascist. Spurs fans become a visible and easy target as both foreigners and as “Jewish”.

It is a subtle difference in the story, but one that is important in understanding the violence as not just a product of the sport of soccer – which is too often the conclusion in North America. Instead, the violence has deeper societal causes that are expressed in the highly combustible cultural experience of sport.