I’m speechless. Well that shouldn’t matter, it’s a blog so I’m typing, but what can I say?

It doesn’t seem real. Maybe if I go to sleep I’ll wake up and the game won’t have happened yet. Canada will be about to play Honduras and we’ll still be in the running for the World Cup.

No. I feel it like a punch to my stomach. I can’t even imagine what it must be like for the players. I am proud of them, I thought they had some great moments over the qualification and were even improving over the six matches I saw them play. They had played so strong on defence, that was my least concern, I was worried that they would have trouble scoring today without so many forwards. Today came from out of the blue.

What I am happiest about is the way soccer has received so much more attention over the last few years, and in part this was due to the way the men’s and women’s national teams had played. I worry that this will be a reason to turn away from a sport that we just don’t compete at. My own hope was never the World Cup – that would have been too much of a leap for the program, but a chance in the hex would have kept the interest going for another year. Now it’s back to square one, and a three year wait before qualification begins.

Positives from this campaign:

– Teamwork: Considering the team I saw against St. Lucia back when this all began, the team isn’t even comparable. Back then there were missed passes, no coordination and too many long balls.

– Solid, solid defense (okay today notwithstanding): In all the games I saw over the last two years they only allowed one goal at home – to St. Lucia. Including the friendly against the US (okay considering their recent form maybe that isn’t such a wild accomplishment).

– Aggression: Canada was thrown off by Honduras’ chippy play, flopping and general annoying behavior. Against Panama, Canada gave it as good as it got. (without the flopping) If we want to play with the big boys we’ve got to act like the big boys.

-Fan support: Each game grew the crowd. From 10,000 fans for the game against St. Lucia (far too many of whom were cheering for St. Lucia) to 18,700 fans when we played Cuba (with only a few scattered Cuban fans). It got loud. It became a home field advantage.

What we still need:

-Goals: can never have enough of those.

– A few more years to develop players: This was why the attention was so important – to keep the next generation of players interested.

– Still more fan support: I dream of the day when they have to move the games to BC Place (yeah, I’ll miss them), we need our own Aztca Stadium (Mexico’s national stadium), but BMO will work until then.

-Discipline: Two bad red cards over the campaign was too many. Yes Occean’s was ridiculous, but we’ll never get a break with CONCACAF refs so we have walk that line even more carefully.

What hurts isn’t that we’re out, that was inevitable. What hurts is both the way that we went out and that I think we could/should have made the hex. Being a Canadian soccer fan means cheering for another country in the big tournaments, but it was nice for a while to be able to cheer for my country. 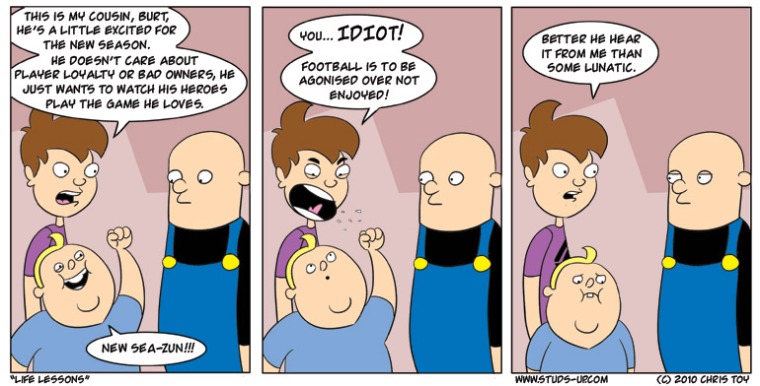 Saturday morning had me and Marcus in front of the TV at 7:30 to watch the Arsenal – Chelsea match. It was a chance for me to see if Arsenal were going to compete this year or not. After two poorly defended set piece goals, no I don’t have high hopes for them this season, but at least the open play during the rest of the game was okay. I wasn’t surprised, having recently shown my colours by putting up an Arsenal poster in my office at York. Fate you can be cruel at times. I love the above Studs Up cartoon because it so perfectly encapsulates sport: picking a winner is too easy, true joy and ecstasy come from having to suffer through countless losses so that you team can finally get to the top – only to muck it up at the last possible moment (Jens Lehmann’s red card in the Champions League 2006 final springs to mind).

Not many things could have cheered me up after that loss, but then the late game happened. I didn’t even get to see it – Marcus had another soccer tryout, but just to know from my phone that Man U had lost to Tottenham gave me a warm and fuzzy feeling inside. Being a fan is all about suffering: either your own, or your enjoyment of someone else’s.