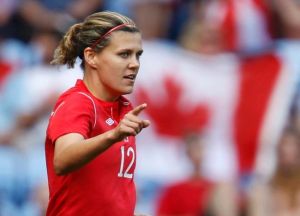 Christine Sinclair is Canada’s soccer heroine right now. With today being 12/12/12 and her just recently being named the winner of the Lou Marsh Athlete of the Year, a number of people have paid tribute to her by unofficially declaring today Sinclair Day (her jersey number is 12, if you were still wondering about the connection).

Although she was named to the Lou Marsh Award (becoming the first soccer player ever to win the award, and first woman since 2008), there was a lot of disappointment in Canada that she was left off the shortlist for the FIFA Ballon d’Or player of the year award. Some in Canada suspect a FIFA conspiracy for Sinclair’s outspoken criticism of the referee in Canada’s controversial 4-3 loss to the US in the Olympic semi-finals and her subsequent 4 game suspension. While that is a possibility, I’m more inclined to agree with her coach, John Herdman. I’ll say that it is a travesty, but likely more due to the fact that so few female players have major name recognition that it’s not surprising when asking a poll of coaches, captains and media from around the world that she was missed out when up against Marta, Abby Wambach and Alex Morgan. Of the three, Marta is certainly the weak link at the international level, but apparently had a great season with her club. As for the other two, both were important parts of the USWNT gold medal winning team, so good for them. Still, it would have been better to recognize Sinclair for her absolute stand out season and the amazing role she played in getting Canada to its bronze medal in London.

Within Canada though, she has received a level of recognition that is rare for soccer players in this country of hockey. Perhaps that is why she was such an easy choice for the Lou Marsh Award. Last month I noted how she ranked equal billing with Steve Stamkos in a Nike campaign and wondered what that meant for the sport of soccer in Canada. The level of attention she can attract between now and the Women’s World Cup in 2015 will do nothing but benefit her sport in Canada.

If women’s soccer can experience such a rise in this country, is it possible for men’s soccer to one day follow? It will be much tougher. Media focus is very set and slow to adapt to changes in sport interests – just turn on any of the Canadian sport channels now and count the seconds until there is a mention of the hockey strike. They have an interest in maintaining the status quo in sporting culture in this country. However, soccer is the largest youth sport in the country now so there is perhaps a generational shift coming in the future.  If so, perhaps one day the best male athletes may be encouraged to play soccer than hockey. Sinclair is a phenomenal player no doubt, now having won the CSA player of the year award 10 times in a row, but is it possible that there have been male athletes out there who could dominate Canadian soccer in a similar way, but as a child strapped on skates instead of cleats? We tend to play the sports we follow and follow the sports we play, so until a deeper soccer culture develops in Canada it will be difficult, especially for males, to see a future in soccer when all the reporting focuses on a league that has decided not to play.

Thanks Christine, you are an inspiration to many kids out there. I’m sure that my son is inspired by the CanWNT and their run in the Olympics, just as much as he was inspired by watching the CanMNT in their World Cup Qualifiers this year. Happy Sinclair Day! It’s a nice way to cap an amazing year for soccer in this country.

So here I begin my blogging experience and my son has a new soccer adventure. He is now old enough to play in an under-8 league and so today was the first of two tryout days for the rep team. I’ve been to every one of his games since we’ve registered him in a league and I’ve watched him grow as a player over the last four years. It has also meant that I’ve found a number of friendly parents that are watching right along with me and supporting their boys.

This is the first age group where parents have had the choice to opt their child into the more competitive division. Up until now the league offered supplementary training before gametime to those with an extra hour to kill, but it was open to all comers. Essentially this season of competitive soccer should work the same way, but it’s clear from the tryouts that the level of soccer will be quite different. These kids usually or always attended the supplementary training, and many we know from summer camps and leagues that we’ve previously played in. Now the boys will be receiving three hours a week practice in addition to whatever festivals the teams attend. We’ve hit the point where boys who are interested get extra to be good, by being good they get extra and so on. Very soon they’ll be on their way to racking up the 10,000 hours that Malcolm Gladwell (Outliers) talks about to become a master at something. Speaking of which, next time I’ll swipe the register so I can get the birthdate data and see if Gladwell is also correct in stating that these competitive leagues tend to be skewed to children born at the beginning of the year. He reasons that the older children (January babies) in an age cohort will be marginally more developed mentally and physically and so will appear to be more talented than a comparable child born in December. With their elite status they then receive more resources, which reinforces the difference in talent that really only existed because of when they were born.

I can see this happening but I don’t think I’ll mention it to my boy with a July birthday.